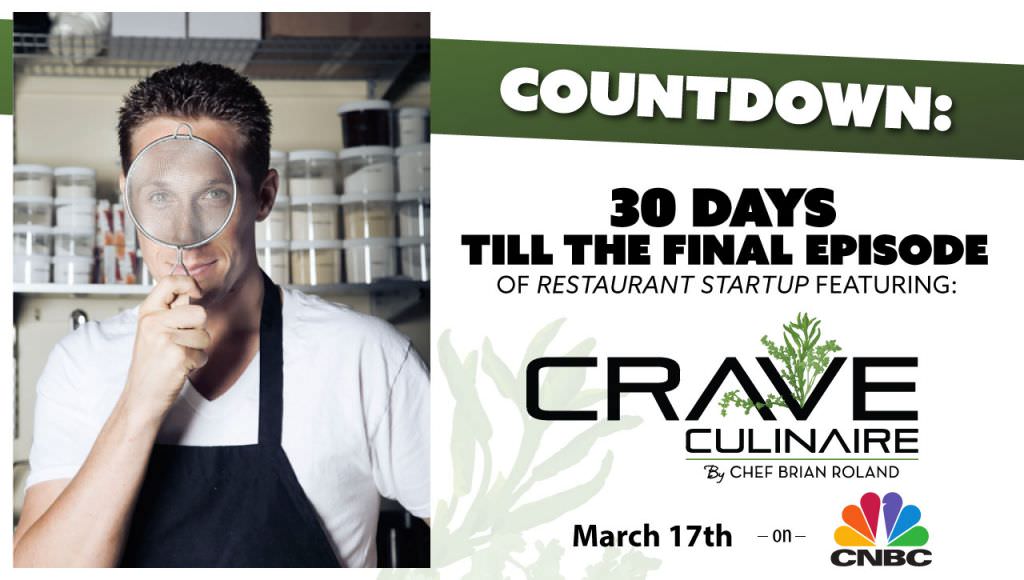 Produced by Shine America, “Restaurant Startup” episodes feature restaurateur and TV personality Joe Bastianich and chef and restaurateur Tim Love, who vie to invest their own money in restaurant concepts they believe could make them millions. The 10-show second season airs on Tuesdays at 10 p.m. ET.

Crave will be featured on the season ﬁnale on March 17th.

“My goal was to show the world that Crave has a unique concept that could work in a restaurant capacity anywhere.  I wanted the hosts, Joe and Tim, to validate that we can produce delicious food that is beautifully presented and that our concept is in fact invest-able.  I feel as if we achieved all of that and I am excited to see how this national exposure helps us position ourselves for the future!”

The ambitious young chef launched Crave Culinaire in early 2013, after serving as the executive chef for some of the best restaurants in Southwest Florida, including Cru, M Waterfront Grille and Chops City Grill. Chef Roland gained his education as a Graduate of the CIA (Culinary Institute of America) and time spent in the kitchens of world renowned Daniel Boulud at Restaurant Daniel and Cafe Boulud.

Not only has Chef Roland established Crave Culinaire as one of the top caterers in Florida, he is passionate about serving and contributing back to the community. Crave Culinaire has donated its services and helped raise millions of dollars for numerous charities, including the Golisano Children’s Museum and Hospital, Make A Wish Foundation, the Humane Society in Naples and many more.

These contributions earned him the 2014 “SWFL’s Superman Award” by Naples Illustrated, Gulfshore Life’s 40 Under 40, 2014 and the designation by Florida Weekly as one of “Southwest Florida’s Young, Incandescent Entrepreneurs” in 2015.